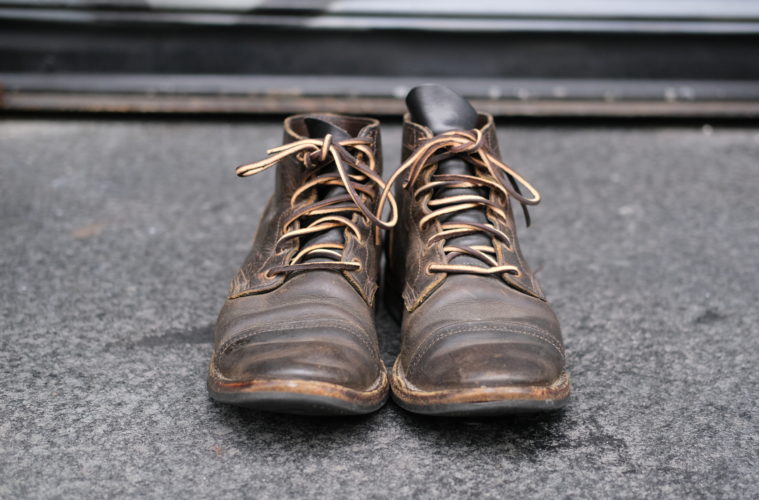 In 2011, Andrew Chen, co-founder of seminal denim brand 3sixteen, met Brett Viberg at Bread & Butter, the Berlin trade show to end all trade shows (at that point in time, at least). Months later, he decided to order some boots—boots that many now consider to be the ultimate pair of Vibergs ever created.

I caught up with Andrew last week, in the course of my research for a much bigger Viberg story that’s coming out soon. At 8:03am, I emailed him: “Friendly reminder: bring your boots.” He remembered. He also remembered pretty much everything about his archetypal 2030-last Service Boots that inspired lust, envy, probably a few fainting spells, and if the Viberg-heads had gotten their way, a run on harness leather.

Here’s what Andrew had to say.

“At Bread & Butter, like any trade show, there are huge booths for the big brands, but they also had a curated a little room in the back called the Fire Department—I think it used to be a fire room or something, they even had little helmets in there. All these smaller, like-minded brands were there, and that’s where I met Brett. I dug what he was doing, we really hit it off, and quickly became friends.

My 3sixteen co-founder Johan did a custom makeup first: a Service Boot on the 310 last in crust Chromexcel I think, that was reminiscent of Japan-style Vibergs from the time. So I started browsing through their WordPress a ton. Other than that, there just wasn’t much out there in terms of photos. Instagram wasn’t big. People weren’t really taking pictures of their boots to show how they broke down over time.

So you looked at the few photos that were floating around—the 4 Horsemen Service Boots, and Inventory’s [ed note: pour one out for Inventory] black roughout Scouts, I looked at those two a lot—and you’d do a Google Image search, and just try to put together something in your head.

Viberg had been making Service Boots in the 2030, but not a ton of them. I sent Brett a bunch of images and said, this leather, this last, this eyelet color. A year or two before they did a run of oxfords with VMC in the same leather as mine. Brett said he didn’t know exactly what its origins are, but it’s a harness leather, similar to what you’d make saddles and reins out of. I really loved how oily the brown was, and just even in lasting it you could see the pull up in the leather.

BRETT VIBERG ON VIBERG’S FUTURE AND SO MUCH MORE: THE STITCHDOWN CONVERSATION

The wholesale cost they gave them to me at was still more than I’d ever spent on boots, so it took me a little bit before I was ready to pull the trigger on them. Until you’ve spent money on something and you it, it’s tough—now it’s a no-brainer. It’s just like spending more than $100 on a pair of jeans, and now that’s what we sell for a living. But I took the plunge. A couple months later, they showed up. The first two weeks were hell, but then they broke in beautifully. To me, that was it. That was a Viberg boot. That was the look. At the time this wasn’t really what they were making a ton of, but maybe I wasn’t thinking about how other people were feeling about it. And it was something you could dress up, or thrash. I really liked that. For four years, I wore them almost every day through the fall and winter seasons.

I posted some photos on Goodyear Welt on Reddit maybe two or three years in, a year after I posted some on my blog. It was my highest trafficked post—people would go out and Google these boots.

What I love most about this boot is how the toe has flattened out over time. There are boot fiends who look at these and say ‘Oh man, why didn’t you put shoe trees in these? Why are they all flattened out?’ But I love everything about how they’ve worn in. And the leather became this white whale, because to my knowledge, this was the last pair of boots this leather was made in. I’d have customers emailing all the time saying ‘how can I get this?’

2013 was our 10 year anniversary, and that was the first time 3sixteen collaborated with Viberg. I said maybe we should make it out of that same leather. Brett said, ‘I don’t even know where it’s from. I think it’s Italian.’ We did the the Johan Specials with blue latigo and copper task roughout heel counter. And the Andrew Specials were modeled after this boot. A LOOK AT WHRE VIBERG IS TAKING THINGS IN 2020

Looking back, I might have been one of those customers who asked too many silly questions myself. When I got them, I was like, ‘these stitches are aligned parallel, and over here they’re a little offset.’ So I emailed and said, is this supposed to be like that? And they were like, ‘You’ve gotta understand something here. You have to see the machines these things are made on. Anyone who’s logging in these boots is not thinking twice about whether the stitches line up—they want the boot to hold together.’

And from that initial interaction, I learned so much about it. Once they said that to me, it clicked: I understood that these are boots that are meant to be worn, and beaten up. And it’s ok to ask questions. Is it supposed to look this way? That’s what they’re there for. But then you have to listen to them. You have to listen to their heart for the product, and their direction, and their desire for it to turn out a certain way.

I will always love these boots, but I haven’t worn them in a couple years now. I wish I had the original laces—they got so old that they would break off here and there, just a piece, and you’d re-center them. But eventually they just got too short, which was a bummer, because I loved how they’d soaked up all the oils from the leather. They were so dark.

Anyway I’m really on this no lace thing now. My Viberg Ropers are legitimately like slippers.”