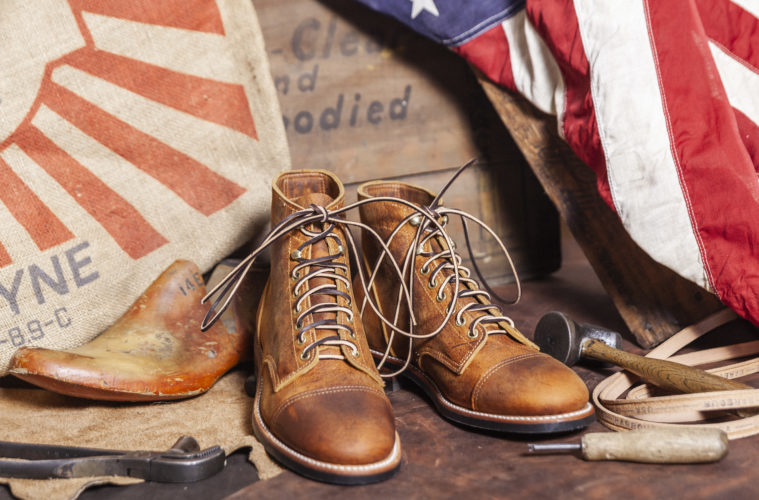 When America’s founding fathers wrote up that constitution of theirs, chances are they were wearing shoes or boots made in America—by a local craftsperson, because that’s where everyone got their shoes.

Over the next couple hundred-plus years, the American shoemaking industry experienced various massive swings. First, the sweep of industrialization, plus the development of footwear-specific processes like Goodyear welting, largely evolved shoe and bootmaking from an artisanal act into an industrial one. At one point in the 20th century, hundreds of prominent American shoemakers made basically everything that went on everyone’s feet, right in the good ol’ US of A.

After industrialization came globalization—which brought with it outsourcing of materials and construction to foreign countries, almost always at significantly lower cost to shoemakers. If your job is to improve your business’s bottom line, that’s a siren song that’s difficult to ignore.

But despite those changes, there still exist a (too-small!) smattering of companies that continue to be hellbent on building their footwear in the US—which in addition to allowing the potential for a more hands-on approach to build and quality control, also means employing American workers. Because of those things, all of them are worth your consideration.

I do want to make something clear, however: just because something is made outside the US doesn’t mean it’s an inferior product. There are excellent shoe and bootmakers in England, Italy, Spain, Mexico, Australia, Hungary, Japan (where some truly exceptional stuff is being made), Canada (Viberg is one of the best anywhere), and plenty more. And just because something is made in the US doesn’t mean it’s an infallible one.

As for this story, there are some companies that make 100% of their products in the US—they can be found in the first section. There’s also a section of those that make some of their footwear here, and some elsewhere. Most of the time (not all, unfortunately), they make it pretty easy to tell what’s what.

Another note: while there are certain governmental restrictions around what can be claimed as a “made in the USA” product, it’s sometimes not the easiest thing in the world to confirm what’s made in what country, and with components from where. So if you’ve heard anything that contradicts the information I’ve got below, shoot us an email hello@stitchdown.com, or a DM at @stitchdown on Instagram, and I can follow up on any information you may have.

But now, to the (alphabetically organized) story!

The Stitchdown Patina Thunderdome: 1 Pair of Boots. 7 Months of Wear. Over $10,000 in Prizes. Learn More Here.

The Made-in-USA Shoe and Boot Stalwarts 20 years ago, there were a nice handful of American companies crafting high-quality dress shoes in America. Today, there is Alden. The company has been at it since 1884, and still produces their impressive and more-popular-than-ever line in their Massachusetts factory. Alden also remains the king of shell cordovan, and source all of the lusted-after leather they use from Chicago’s Horween Leather Co. A very interesting upstart bootmaker creating some excellent products at a very competitive price, Mark Albert is run by Mark Barbera (see the full Stitchdown Conversation with Mark here), a Somerset, PA native who launched the brand in 2017 with a Kickstarter selling Chelsea boots crafted by a factory smack in his hometown. Today, Mark & co. make an impressive range of boots and derbies, all in Somerset, largely using US materials. When your entire company is one guy quite literally hand-making boots in his shop, and that shop is in Missouri, you’re as definitively a made-in-the-USA bootmaker as anyone could ever hope to be. JD Gabbard started MYG in 2015 with the goal of laboriously hand-cutting, hand-lasting, hand-stitching, and hand-welting deeply unique, made-to-measure boots that harken back to the 1940s in a way that no other boot I’ve ever seen does. Each pair takes 40-50 hours to create, which means Gabbard makes no more than 50 pair a year. Time to get on that waiting list now…

Notable boots: All of them! But more specifically, the Nail Shank, and 1940 MS-3 MCB Nicks has undergone some changes in ownership since Nick Blahcuzyn made his first logging boot in his basement in 1964, but everything they create still runs through the hands of fewer than 20 bootmakers in Spokane, Washington. New owner Steve Mowe—whose dad was a career logger in Oregon, and who spent summers logging himself—remains focused on making hardcore boots for hardcore work applications, but also has expanded Nicks’ dress casual offerings. While not every component is sourced in the US, the majority are, including Vibram soles from the Italian company’s Boston plant. One of the more tenured of the newer US players, Chicago-based Oak Street doesn’t make their boots in the City of Windiness, but to the best of my knowledge their moccasins are hand-stitched in Maine, and their shoes, and signature Trench and other boots are manufactured in upstate New York—and they use plenty of Horween leathers, with is always a plus on the Doing Things American front. Western New York-based Parkhurst has a holistic approach to making its boots (and forthcoming shoes) in the US: almost all materials are sourced from American suppliers  (notable exception: their unique kudu leather, whose stock is largely controlled by British company C.F. Stead), and even essential non-US components like Euro-made Vibram soles are purchased from American mom ‘n’ pop suppliers. Doing everything stateside isn’t cheap—but despite his commitment, Parkhurst founder Andrew Svisco (see the Stitchdown Conversation with him here) still manages to sell his wares right around a very appealing $300 price point. Another Maine stalwart, Quoddy began hand-sewing shoes in 1947, but was rethought and revived in 1995, when the founders’ grandson purchased the company. Today, they make all their shoes in Lewiston, Maine. The creation of hand-stitched moccasins, as the name implies, involves a ton of skilled handwork, and Quoddy believes that doing it in the US is the best path forward to quality. More Maine! In addition to doing contract shoemaking for a number of brands (including Helm and Sperry), family-owned Rancourt also produces its own impressive, nicely priced line of boat shoes, camp and ranger mocs, beefroll penny loafers, and a smattering of boots, wingtips, and more, all from its Lewiston workshop.

Role Club is synonymous with Brian the Bootmaker, a young, LA-based micro-revolutionary with a really cool hat. While he also does some excellent, often creative re-sole jobs as well, Brian’s main focus is hand-making a range of boots, one at a time. His Underdog lace-ups are probably my favorite, but it’s not a stretch to say he’s most well-known for his engineer boots, which many consider to be some of the best out there, anywhere. Founded in rural Pennsylvania, then transplanted to Boulder, Colorado, Truman has since shifted its operations to the Cradle of American Bootmaking, the Pacific Northwest. They’re perhaps most well-known for offering an array of intriguingly unique leathers on service-type boots in either stitchdown (hey now!) or Goodyear welt construction. Another Pacific Northwest stalwart, the West Coast Shoe Company was founded in 1918 by the perfectly named John Shoemaker. 101 years later, Wesco still builds all their boots in a cozy factory in Scappoose, Oregon, just outside Portland (see the Stitchdown Conversation with Wesco’s Chris Warren to learn a lot more). Many of their wares which are intended for heavy work applications, but they’ve drastically expanded their offerings in the more casual realm—and while they sell off-the-rack boots too, every single detail can be customized, including sizing and fit (their Instagram can be a much better place to get a sense of that than their actual site at the moment). Straight out of—you guessed it—the Pacific Northwest, White’s got its bootmaking start back before the Civil War, in West Virginia’s logging lands. In 1915, the company set up shop in Spokane, Washington, where it’s still based today, proudly assembling everything from 10-inch forestry boots to service boots, engineers, chukkas, derbies, and their famed Semi-Dress and SmokeJumpers.

Companies Making Some Fantastic Footwear—Although Not Everything—In The US

As their approach has shifted over the years since the company built its first boots in 1901, Wisconsin-based Chippewa has done an admirable job of being up-front about what is and isn’t made in the US—and even when some of its boots’ components are sourced from outside the country. Look for the “Made in the USA with global parts” designation when shopping their site. Portland, Oregon’s Danner has been at it since 1932, when it was founded in logging hotbed Chippewa Falls, Wisconsin. Today, Danner’s cemented boots are made outside the US, while their stitched-construction models, including my own beloved Danner Lights and many of their other classic hiking boots, are made right there in Portland—and they’re very clear on their site which is which. While some models are produced outside the country, including in Brazil, many of Austin-based Helm’s core line is made in Maine, at the highly trustworthy Rancourt factory—including their signature Muller, as well as their Marion and Railroad boots. You know their Bean Boots: rubber-vamped classics built for tromping in all sorts of conditions. That entire line—6-inch, 8-inch, 10-inch, and more—are built right in Maine, as they have been since 1912. Perhaps America’s most iconic bootmaker, Red Wing is based in…well…Red Wing, Minnesota, and even owns its own leather tannery in the state as well, called S.B. Foot. While not all of Red Wing’s products are constructed in the US at this point, from what I can gather the Red Wing Heritage line (which is largely what Stitchdown focuses on, as opposed to Red Wing’s “true” work boots), remains made in the US. I can attest that my three pairs of Red Wing Heritage boots (two pairs of Iron Rangers, and one pair of 8138 moc toes) are absolutely bulletproof and inspire a ton of confidence. While some of Wisconsin-based Thorogood’s boots are built outside the country, their round toe and moc toe work boots (which I own, and brutalize, and love) are still made in the USA—as is their more casual-ready 1892 line. In all, 91 different Thorogood models make the mark. And earning them more high marks as a company worth supporting, Thorogood (and Weinbrenner, the larger company it’s part of), has been employee-owned since 2000.

THOROGOO MOC TOE: A FIVE YEAR REVIEW OF ONE OF THE BEST VALUES IN BOOTS Over the past five or so years, Thursday has stormed the boot landscape with models offering impressive looks and longevity for around $200 (no easy feat). While their models in that price range are not made in the US, Thursday’s handsome Vanguard line is—and at $265, they still deliver on Thursday’s value proposition quite nicely. Wolverine has called Rockford, Michigan home since 1903 (the company was founded 20 years earlier), and today it produces the vast majority of its work styles overseas. But it continues to make the bulk of its signature 1000 Mile casual/lifestyle line—which was introduced in 1910—in Rockford.

Stories like this take a serious amount of work and time. If you find them valuable, please consider supporting Stitchdown with a small monthly donation by joining Stitchdown Premium—you might even win a free pair of boots