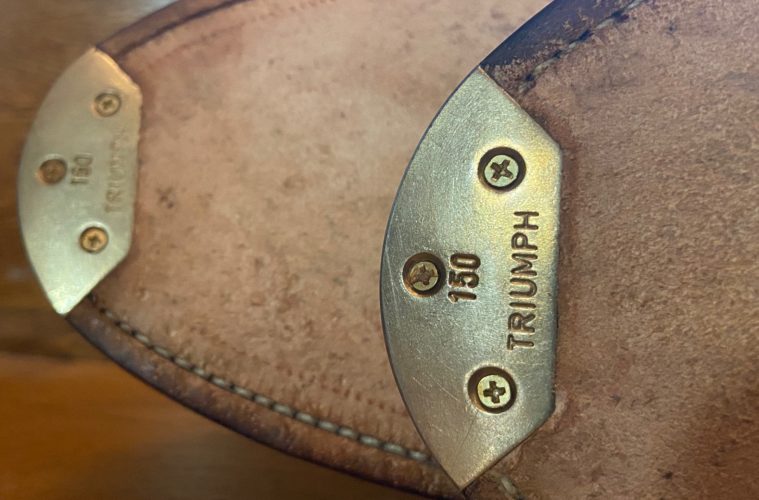 Toe Taps: What They Do, Why They’re Important, and How They’re Installed

Toe taps (or toe plates) are way more than just a bit of flair to show off on the soles of your shoes—they’re actually quite beneficial to the wearer, helping to prevent the tips of the soles from wearing down too quickly, and potentially even delaying the need for a full resole.

We’ve enlisted the help of Grant from Unsung Repair House to explain the benefits of toe taps, how some of them differ, and how they’re installed.

Who Should Consider Getting Toe Taps?

First and foremost, it’s definitely something to look into if you wear leather-soled shoes frequently—especially if you have just one pair that isn’t getting regular rotation with any others. While you can technically put toe taps in flat rubber soles to help offset wear, rubber soles generally won’t wear away at the toes as quickly as leather soles tend to do.

Furthermore, toe taps are especially valuable for someone who often walks on all kinds of hard flooring—wood, pavement, cement, marble, you name it. While leather soles can be made of some hardy stuff, they can still get chewed up slowly and steadily over time as you walk forward and strike the floor. If your gait has you striking the floor primarily with the front of the foot, the tips of your soles will wear down even more quickly. Getting toe taps can help to mitigate this wear.

What Kinds Of Toe Taps Should I Be Looking To Get?

Ones that sit flush in the sole—usually metal, though you can encounter some rubber versions. Pass on the cheap plastic toe taps; they’re not really worth it in the long run. “Plastic taps will function similarly” to metal ones, said Grant, “but they wear out fast.” Plus, there’s a question of how comfortable they are to wear, and since they normally aren’t designed to sit flush in the sole, plastic toe taps could potentially affect your gait.

Many skilled cobblers will carry metal toe taps, primarily from Lulu or Triumph. They have slightly different looks, but Grant doesn’t believe there’s much of a difference between the two products. “The Triumph plates are maybe slightly more difficult to install because the back side of the plate is three-sided, versus the straight line of the Lulu plates,” Grant said. “After having worn both types before, I can’t tell any difference in wear.” The short answer is: it depends, but not really. You might be imagining that putting on some metal toe taps will turn your pair into tap dancing shoes. In reality, the plates on tap dancing shoes are much larger than the regular toe taps your cobbler will use; plus, tap dancing shoes not only have a huge plate under the forefoot, but one on the heel as well. Sure, if you purposefully and forcefully struck your toe taps against the floor, you would make some noise—but it doesn’t compare to the cacophony of sound from actual tap dancing shoes.

As for creating scratches, good toe taps will sit flush with the rest of the sole, and any sharp edges will have been sanded down. Maybe marble or especially soft wooden floors would see some scuffs, but generally it’s not an issue.

How Do Toe Taps Get Installed?

Grant was kind enough to share some photos he took as he put some toe taps on my pair of Grant Stone Longwing Bluchers in British Tan Calf. As you can see, I had worn well into the outer layer of sole leather and was on my way to reaching the welt. For some shoes, wearing into the welt spells calamity and makes them very difficult to fix, so it’s wise to do something about toe wear before reaching this point. After tracing where the toe taps will sit, Grant carefully cuts away a segment of the sole, taking care not to disturb the sole stitches too much. Checking to make sure the plate will sit flush with the plane of the sole, Grant then attaches the toe taps with small screws. 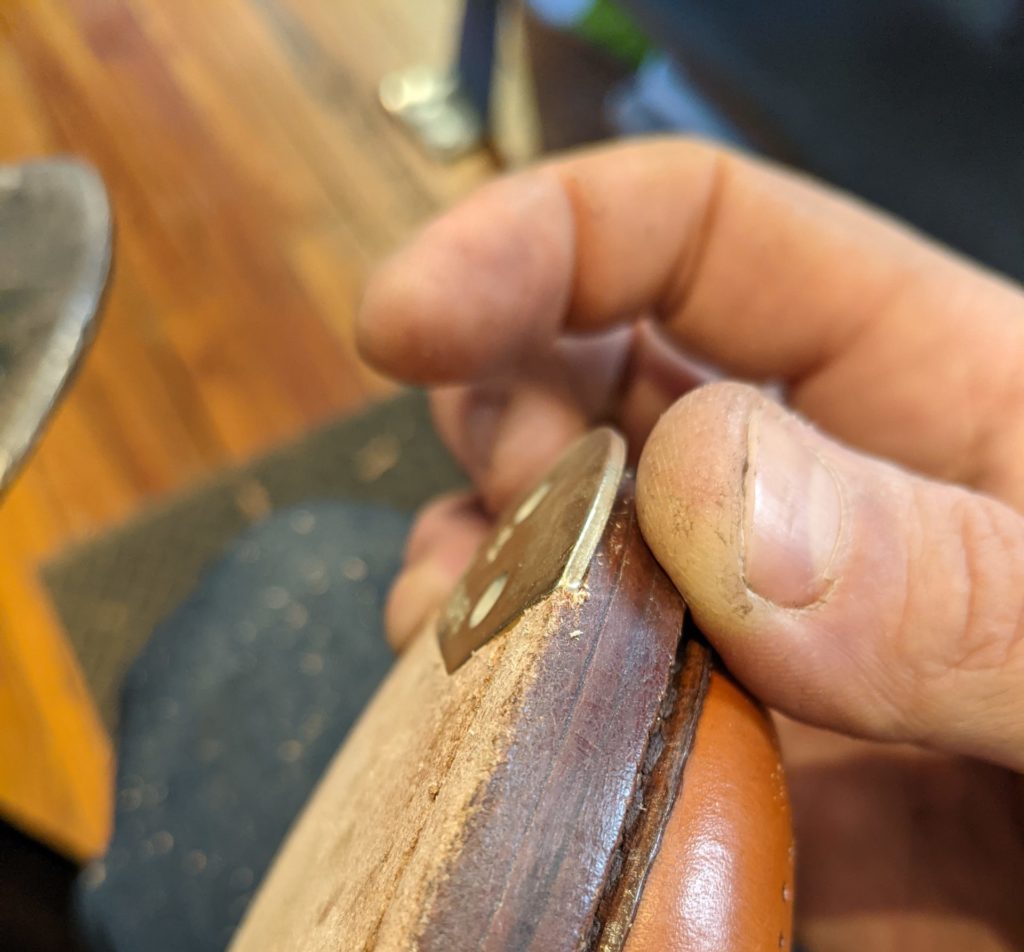 Finally, he sands the edges down so that they’re smooth, and then applies a fresh coat of edge dressing and polish to make everything look nice and uniform again. But Wait! Do I Need To Get My Shoes Completely Resoled To Have Toe Taps Put On?

If you manage to take action before your soles get completely worn down, you can often get toe taps installed without a full resole. You’ll notice in the photos above that Grant kept the original sole on my shoes. All it took was a small bit of leather buildup to make the plate sit level with the plane of the soles. Grant explained his case-by-case approach:

“I look at the wear on the rest of the sole to determine if a buildup is sufficient or if replacing the sole is a better approach. Everyone’s wear pattern is different, and I do encounter plenty of people that are really hard on their toes before they put much wear anywhere else. In that case, it is very reasonable to build up even if they’re nearly worn through to the welt, a little rebuild of the leather to its original plane and then installing plates will work well. I try to quantify sole wear as a percentage, and I usually offer my opinion that if the soles have 50% or less left, it’s maybe a better approach to replace the soles and then add plates as more of a preventative measure.”

You can see how Grant does this buildup in the photos below. First, he glues on a piece of sole leather. The excess leather gets trimmed off. Now the toe plate is ready to be attached. Thanks to the added material, the plate is now able to sit level with the plane of the sole. Again, after the edges get sanded and polished, the work is complete. And There You Have It

Hopefully this helps provide some more insight into toe taps. For our leather-soled brethren, we can’t recommend them enough—they really do make a difference in extending the longevity of your soles.

Big thanks to Grant at Unsung Repair House for his help on this topic. Check out their work over on Instagram and YouTube, and visit their website to get yourself set up for some toe taps or one of the many other terrific shoe care services they provide.