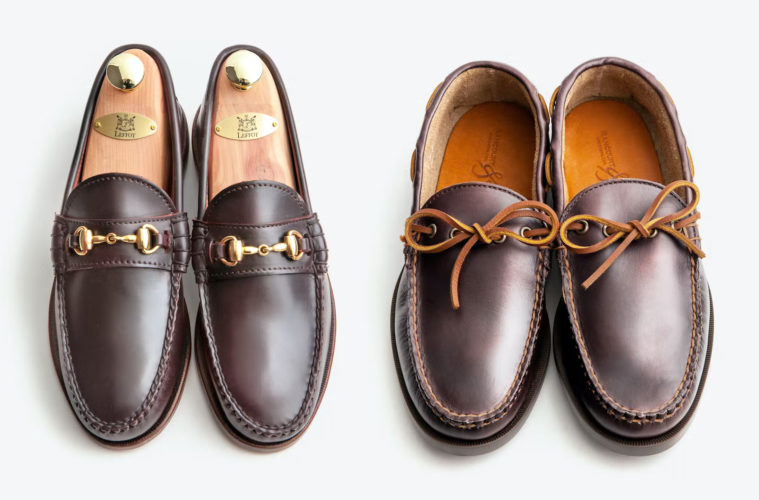 The latest collaboration between NYC shoe paradise Leffot and Maine moccasin masters Rancourt & Co. checks ample boxes: a beacon for Ivy style enthusiasts; an exemplary usage of the much-vaunted shell cordovan from Horween; a fair bit of shoe-nerd history; and above all, just a damn nice-looking pair of mocs.

Rancourt has been working with Leffot all the way back to roughly the time both businesses began in the late 2000s. Leffot and Rancourt made a big splash with one of their first collaborations, the Ivy Loafer, back in 2010. The original Ivy Loafer was a nod to Take Ivy, a Japanese photobook with legendary influence among style mavens. Take Ivy’s detailed examination of 1960s American Ivy League college campuses, and the distinctive outfits of the students there, was a big part of what shaped the Japanese Ivy style in the following years. In turn, Japan’s love of Ivy boomeranged back to the States in the late 2000s/early 2010s, creating a sort of neo-Ivy revival. Thus: Leffot and Rancourt’s above Ivy Loafer, a Venetian-style loafer (a shoe commonly found on 1960s college campuses) made with a handsewn moccasin construction on single leather soles, unlined, in various colors of Horween shell cordovan.

Unlined shell shoes were, and are still are, a rare combination, particularly when that shell makes up both the uppers and the footbed. (“This is a pure shoe,” Ron Rider remarked with adoration at the time.)

In 2012, after Take Ivy had been re-published, Leffot and Rancourt put out a sequel of sorts: the Bit Ivy. Another example of classic Ivy style, the bit loafer was conjured up by Rancourt in Horween shell once again, also on single leather soles. The Bit Ivy has been released and re-released in various colors in subsequent years. It’s back once again, but this time, it’s being joined by yet another Ivy staple.

For the first time ever, Rancourt’s Gilman Camp-moc is being made in shell cordovan. The slip-on camp-moc was popularized by one Leon Leonwood Bean (aka…LL Bean!) back in the 1930s. While some camp-mocs are made with crepe or double leather soles, Rancourt’s Gilman features a proprietary polyurethane rubber sole, making it wearable pretty much everywhere, from camp to Ivy League campus.

“We’ve been collaborating with Leffot for many years now and what started as a pretty simple idea to make a Venetian handsewn loafer in shell cordovan has evolved into an ongoing project to reinterpret our classic handsewn styles in Horween Shell Cordovan,” Kyle Rancourt told us. “The next evolution of that project is the Gilman camp-moc. The camp-moc is one of our perennial best-sellers and one of the most iconic Maine handsewn styles. Leffot is revered for their shell cordovan collection, and the camp-moc adds a more casual option with a focus on comfort and wearability.”